Once you have the SkookumScript plugin installed, you’ll see a new button in the UE4 editor main tool bar:

Click it to launch the SkookumIDE, your main hub to using SkookumScript! If the SkookumIDE is already running, it will be brought to the foreground.

You’ll also find a similar button in the tool bar of the Blueprint editor:

This allows you to quickly switch your workflow back and forth between UE4 and SkookumIDE.

Now that you have figured out how to launch the SkookumIDE, you can immediately start using its Workbench as a powerful command console that allows you to query and manipulate just about anything you like. The SkookumScript UE4 Plugin is deeply integrated into the Unreal Engine. Right out of the box, thousands of classes, structs, methods and member variables are at your fingertips to make awesome things happen.

Using the SkookumIDE as a command console does not require your project to use SkookumScript for gameplay scripting. The command console will work with any UE4 project whether just starting a project, midway through or in the final phase!

Running script snippets will become an integral part of your workflow – and everyone on your team will love it.

See more on the Workbench widget page. The Tutorial Workbench includes a great set of script examples to learn and experiment.

Next step: Set up a project to use SkookumScript

After familiarizing yourself with SkookumScript by playing with the SkookumIDE Workbench console, you might decide that you’d like add some SkookumScript code to your project.

Follow the steps in Set up a UE4 project to use SkookumScript.

An easy first step of creating gameplay with SkookumScript is simply adding methods (or coroutines) to UE4 classes.

UE4 classes are automatically reflected to SkookumScript, and appear in the SkookumIDE class tree under the same name as in UE4. You can either locate your UE4 class via the class filter widget, or, if you have it open in the UE4 Blueprint editor, by simply clicking the

Once your class is selected in the SkookumIDE, add a method or coroutine like you would to any other SkookumScript class.

For example, you might add a method say_hey to the Actor class with the following body:

You can then invoke this method on any actor, e.g. GameLib.player_pawn.say_hey.

As mentioned above, you can use SkookumScript to run code on any UE4 actor, for example from the Workbench console. However sometimes you also want to run special code whenever a particular type of actor gets spawned, or when it gets destroyed, or you want to store SkookumScript variables in an actor.

You can also extend the UE4/Blueprint class hierarchy with SkookumScript-only classes. E.g. in the case of an Enemy actor class, a class EnemyCaptain that is derived from Enemy and inherits most of the Enemy class’ functionality, but overrides a few methods that do things differently. 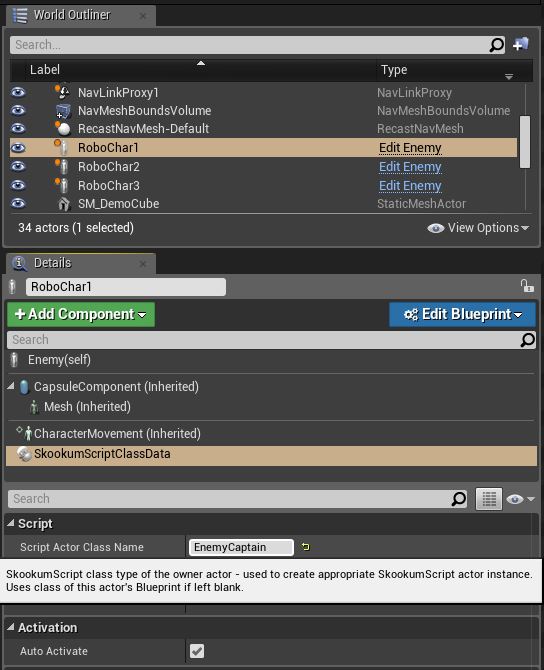 Mind components are a convenient way to instantiate and destroy Minds in UE4. You can instantiate a SkookumScript Mind in a UE4 game by attaching it to an actor using a SkookumScriptMindComponent. Simply enter the name of your Mind-derived class into the Script Mind Class Name parameter of the SkookumScriptMindComponent, and an instance of your Mind class will be automatically created and attached whenever that UE4 actor is spawned, and detached and destroyed when the actor is destroyed.

A good example of Mind components in action is a Level Mind: Place an empty actor in your level and name it Level Mind. Add a SkookumScriptMindComponent and set the Script Mind Class Name to the name of your Mind class. Your Mind will now be instantiated when that level is loaded and destroyed when the level is unloaded.

More information can be found on the Mind object and the Master Mind page.

SkookumScript allows you to combine script methods and coroutines in many different ways with Blueprint event graphs, allowing you to get the best out of both systems.

To expose a SkookumScript method or coroutine to the Blueprint event graph system, prefix its declaration with the annotation &blueprint like in the following example (handle_gamepad_look_up() method in the class Pawn):

Then, compile your project, which will make it available for placement in your event graph. Right click in your graph, and select the method you just exposed to Blueprints. 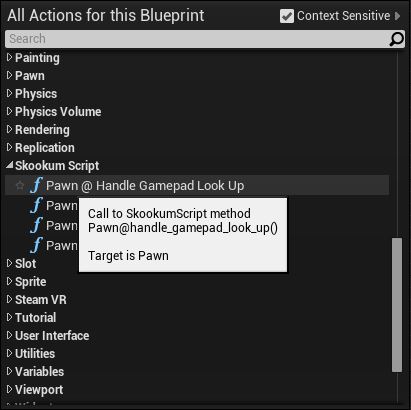 Place it in your graph, and connect it just like you would any other node. 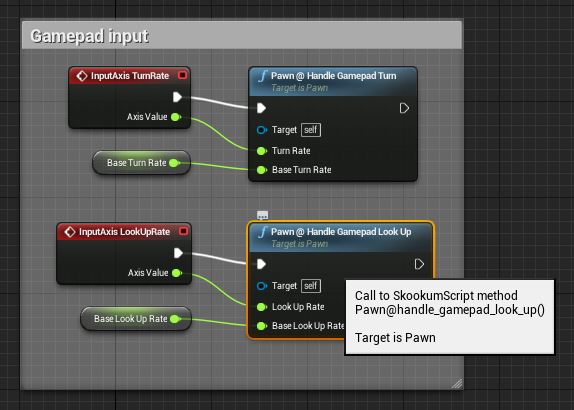 Now, whenever its execution pin gets triggered, the SkookumScript method is invoked and its return value (if any) passed to the output pin.

Coroutines can be declared and placed in much the same way. There are two differences though:

Coroutine nodes always trigger the outgoing execution pin immediately, regardless of the time it takes for the coroutine to terminate. If you would like something to happen in the graph when the coroutine finishes, use event nodes as described in the next section.

To create a Blueprint event, create a method declaration prefixed with the &blueprint annotation, but without a body.

Again, recompile its SkookumScript class (or, the entire project) which will make it available for placement in your event graph. Right click in your graph, select Add Event, then, in the Skookum Script category, select the method you just exposed to Blueprints. Place it in your graph, and connect its output pins just like you would any other Blueprint event.

You invoke a blueprint function or custom event like you would invoke any SkookumScript method, e.g. my_actor.my_function(arg1 arg2).

You invoke a dispatcher just like you would invoke a closure, e.g. my_actor.@my_event_dispatcher(arg1 arg2).

UE4 allows game objects to “listen” to events happening in the world via MulticastDelegate objects. MulticastDelegate properties declared in C++ are automatically reflected to SkookumScript as a coroutine that comes in three flavors:

The following code waits for an ActorBeginOverlap event on the TriggerBerzerk volume, then proceeds with execution:

This code repeatedly executes code whenever a TakeAnyDamage event occurs:

Here is an example of processing ActorBeginOverlap events until we find one that we like, then proceed with execution:

There is a component specifically designed to create behavior objects to attach temporarily to an actor. The idea is to attach it to an actor and the actor starts doing something controlled by the component. Then detaching the component stops the behavior. You create your own behavior component by subclassing from SkookumScriptBehaviorComponent either in the SkookumIDE, or creating a Blueprint class derived from it in the UE4Editor. You can also subclass from USkookumScriptBehaviorComponent in C++ to create your own custom script-enabled C++ component. This component can be attached to an actor in UE4Editor but is also visible from scripts as a

class, and can be attached and detached via script. If you like, you can attach and detach your component several times with the object living on inbetween, potentially doing things even while detached. Attach as many components to an actor as you like. Mix between Blueprint-created and script-attached SkookumScriptBehaviorComponents. You can give your custom SkookumScriptBehaviorComponent any constructor you like that can take any number of arguments.

The SkookumScriptBehaviorComponent has the following methods to override with your own:

There are also the two methods attach and detach that you can invoke to attach/detach your component to/from an actor.

The SkookumScript plugin also reflects dynamic UE4 types as well as most of their properties and functions to SkookumScript. Whenever a new UE4 Blueprint class, user defined struct or user defined enum is loaded into memory, the plugin generates Skookumscript script files for it, with declarations of its properties, Blueprint functions, custom events and event dispatchers.

The storage format is one archive file per class, struct or enum. The plugin will automatically check out, add or delete these files from source control, so you can keep them revisioned along with your project assets and script files.

In SkookumScript.ini, you can specify the following parameters