The mad scientists behind SkookumScript are veteran video game developers.

You can help in SkookumScript’s development. The community effort is lead by Zach Burke and the original SkookumScript team still tinkers. 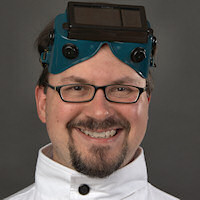 SkookumScript creator Conan Reis (LinkedIn, About.me) is a video game industry veteran (since the early 90s) and a master at the design and implementation of video game programming languages. Since the acquisition of SkookumScript by Epic Games he is employed as a Principal Engineer at Epic working on secret projects related to Fortnite and the Unreal Engine – and sprinkling SkookumScript DNA and related concepts wherever he can. His background also includes the gameplay and artificial intelligence aspects of game development, creating 3D world editors, and the guts of game engines and other development tools.

His programming languages include the distributed language “Ergo” (developed in 1995, funded in part by a $105K grant from the BC Innovation Council) and “ChewieScript” (developed in 2001 as the successor to the LucasArts’ legendary SCUMM scripting language). Conan founded Agog Labs in 2004 to create SkookumScript—after initial development, United Front Games licensed SkookumScript to serve as the backbone of their award-winning open-world games Sleeping Dogs (2012) and Sleeping Dogs: Definitive Edition (2014).

When the credits roll at the end of movies about science running amok, Conan’s friends often point an accusing finger at him and predict that one of his creations will someday destroy the world… or save it?

I have always had great respect for sane science—but mad science has always been my calling. – Conan Reis
SkookumScript creator 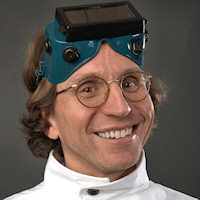 Technical master extraordinaire, Markus Breyer (LinkedIn) has multiple decades of experience in the video game industry. Since the acquisition of SkookumScript by Epic Games he is employed as a Principal Engineer at Epic working on secret projects related to Fortnite and the Unreal Engine. He has held senior and R&D positions at Tesla and seven major game studios including 2K, LucasArts and Factor 5, where he shipped ten AAA titles and contributed to over ten more. He specializes in advanced math, animation, simulation, physics, rendering, collision, compression, and speaking in a charming German accent.

Over his years in the video game industry, he created numerous engine and tool systems, many so advanced he was the only engineer at the company qualified to create them. His previous position as a Senior R&D Engineer at 2K Games included assessing new technologies for potential use in video games—when he assessed SkookumScript, his professional conclusion was that he should quit his job and join the SkookumScript team. So he did. 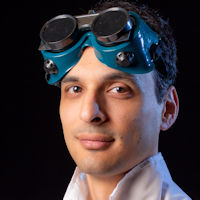 Zach (LinkedIn) graduated from college in 2005 with a degree that nobody cares about. He worked in the enterprise storage world for a few years followed by the mobile industry. Throughout this time always moonlighting as a wannabe game developer and game engine aficionado.

When he accidentally inspired his brother Jake to start 3D modeling in 2011, the 2 of them decided to start making video games. 5 games, 2 live wallpapers, and about a dozen prototypes later they decided to make the jump to Unreal Engine 4. Being so distraught with compile times and iteration speed in UE4 led Zach to the glorious discovery of SkookumScript and inspired him to write the somewhat ambitiously named article The Death of Tick: UE4 & The Future of Programming.

With a passion for teaching and instruction, Zach also enjoys writing and contributing to open source projects. He also enjoys playing his hammered dulcimer, improving on his photography and having deep programming architecture discussions with his 2 dogs. 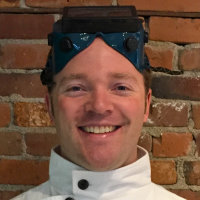 Stephen (LinkedIn) started his programming career in 1998 developing warehouse transaction and payment processing software, but dreamed of making video games (or anything more fun, really). In 2004 he started making flash games for Cackleberries Entertainment, and nine flash games later, he joined Rockstar Games, where he developed AI, animation and other gameplay systems for Bully and Max Payne 3.

In 2008 he joined United Front Games to bring the open-world interactions of Sleeping Dogs to life. Working closely with the mission designers, he built SkookumScript interfaces to the gameplay systems, and realizing the power of the language, started to build gameplay systems in SkookumScript itself. For UFG’s Smash and Grab, he brought close-quarters combat to a multiplayer arena.

Outside the mad computer science lab, Stephen harnesses the occult power of heavy metal music to create a temporal vortex in which he can enjoy many more activities than his linear spare time allows, including skiing, co-ed ice hockey, playing guitar in an all-gamedev rock band, and of course playing video games. 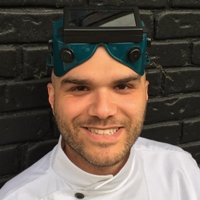 Shadi Dadenji (LinkedIn) is a true citizen of the world. He is half Polish and half Lebanese, was born and raised in Beirut, is quadrilingual, and has lived and worked in many far-flung places.

Shadi was one of the first SkookumScript users at United Front Games—as they developed Sleeping Dogs, he liaised between engineering and mission design to ensure that SkookumScript had all the bells and whistles the designers needed. After his stint at UFG, he helped ship The Witcher 3 in Warsaw and Horizon: Zero Dawn in Amsterdam before returning to Canada and reigniting his smoldering love affair with SkookumScript.

He enjoys singing and playing musical instruments, and is good enough that his neighbors rarely complain about the racket. 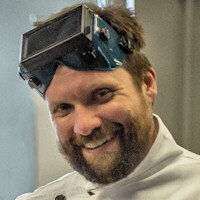 Glen Callender (LinkedIn) is a Vancouver Island, Canada-based writer, editor, performer and media artist. He was the SkookumScript copy editor, PR flack and Booth Czar (Game Developers Conference, DICE, etc.). He scripted acclaimed dialogue for the Electronic Arts titles Need For Speed: Undercover (2008) and Need For Speed: The Run (2011), and wrote the manual and help docs for TSR’s Dragon Magazine Archive (1999). Glen lectures on video game writing for the University of British Columbia’s Writing for New Media course. A lifetime ago, he won the top award at the 1992 B.C. Student Film and Video Festival. Glen has produced and performed one-man shows at 13 Fringe theatre festivals across Canada and the USA.

He is a passionate cat lover and future crazy old cat lady.