This page assumes that you have already done these three things: 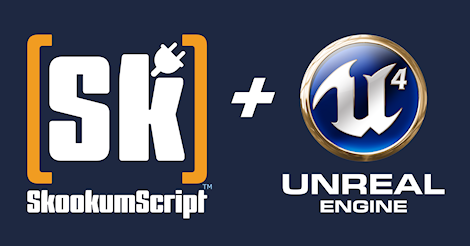 Ensure that either the SkookumIDE and UE4 Editor are running before continuing.

Adding custom routines to a project

SkookumScript can easily be used to execute pre-existing generic engine commands while your project is running. Eventually though, you will want to add custom SkookumScript behavior to your project such as adding methods which are a type of routine.

For this tutorial, we will create and modify a SkookumScript routine that solves the classic FizzBuzz Problem:

Write a program that prints the integers from 1 to 100 (inclusive). But: 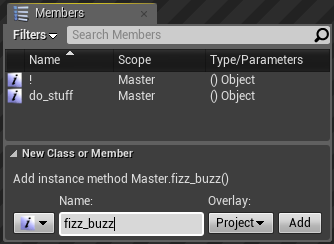 Adding an instance method named fizz_buzz to the Master class in the Project overlay.

TIP The Master class is a good starting point to add initial code for most projects.

The New Class or Member pane may be small, but it is a powerhouse of creation. Learn more about its amazing abilities here.

When you create a method, the default text for a new method will appear in an Editor widget: 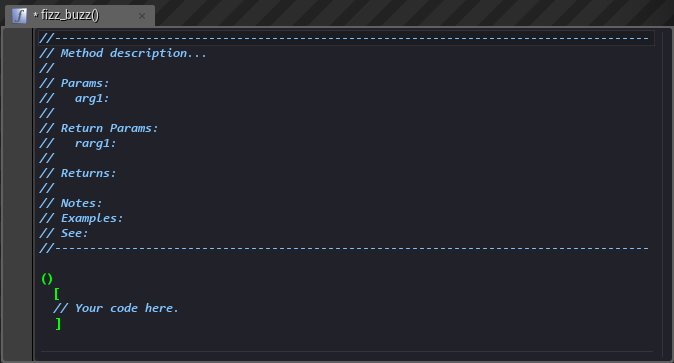 Now we’ll update the comments and code body to add a method that solves the FizzBuzz problem. Delete the default text and replace it with the following:

Commit a method to the runtime

Now that we have added our FizzBuzz solution to our fizz_buzz method, we will compile it and send it to the project runtime. To do this, do any of the following using the SkookumIDE:

If the compiling is successful—and it will be, if you copied the example code into the Editor widget properly—the question mark on the Commit button will become a green check mark and the method will be committed to the runtime.

Now we will execute our new fizz_buzz method in our running project:

You should see this output in the Log widget:

NOTE The nil at the end is the result of the call to the fizz_buzz method, which returns nothing.

Congratulations! You have made and executed a simple method.

TIP Routines such as fizz_buzz() can be run as many times as you like from the Workbench like this, or you can call them in other routines that you write.

To specify different parameters or the code body of a method you just change the empty parameters () and the rest of the code as needed and then recommit the changes.

Our fizz_buzz method currently does 100 iterations (internal repetitions), one for each integer from 1 to 100. Now we’ll modify it so we can specify the number of iterations as an argument when we execute it from the Workbench (REPL) widget.

Now you can call fizz_buzz with a specific number of iterations:

TIP Committing changes live while a project is using routines that are changed, will automatically use the updated versions of the routines the next time they are called without needing to stop the runtime—which is very cool.

We recommend experimenting with this FizzBuzz example or make new methods and see what changes you can make.

TIP Parameters are described in detail in the syntax.

Look around at other routines in the class hierarchy using the SkookumIDE Classes and Members widgets to get ideas.

NOTE Routines that have no code block body [ ] are defined and written in C++, though you will still see their parameters and description comments.

If you have questions or comments about this tutorial, please post them to the SkookumScript Forum page for this tutorial.